Hasiji is last ball hero for Caribbeans in final

CARIBBEANS clinched a thrilling last-ball victory in the Senior League’s Loros Cup Twenty20 final. A superb piece of fielding by Nikal Hasiji on the cover boundary earned them a one-run victory over Twycross. 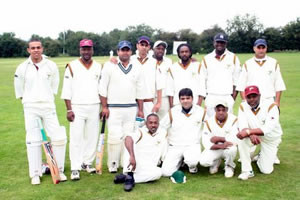 The dramatic finish happened in fading light. Bevan Barthley hit 32 to help Caribbeans to 131-9 despite Jordan Lee taking 3-19 and Rose 2-13. Mohammed Khan bowled a tight opening spell for Caribbeans and won the man-of-the-match award. But Lee Taylorson’s 29 and Ben Machin’s 19 helped to keep Twycross up with the asking rate.

At the start of the final over, Twycross wanted six runs with three wickets in hand. That came down to a target of three off the final ball, although two runs for a tie would have been good enough for Twycross because they had lost fewer wickets.

Stu Miller drove the ball towards the cover boundary, and he and Matt Dash ran one and set off for what would have been a match-winning second. But Hasiji arrowed a throw over the top of the stumps, Miller was run out and Caribbeans took the crown.

Caribbeans booked their spot in the final with a 10-run semi- final victory over hosts Leicester Ivanhoe. They scored 155 and restric­ted Ivanhoe to 145 in reply.

Twycross went through with an eight-wicket win over Bharat. David Rose took 3-9 as Bharat totalled 90 and Mark Altaian’s 40 not out led the Twycross run chase.